So I was watching the Olympic gymnastics the other night. They'd have a gymnast come on, give name and country, and the vault or whatever they were going to do. They performed, the perfect score and the gymnast's score were given, applause.

You know what? I still haven't got a clue what they did except some incredible flips and rotations. I don't understand the scoring system, or how it totals up. A little research, and I would of course. But I'm still a happy viewer.

Gymnastics is simply popular. I can't believe everyone knows the scoring system perfectly. They just enjoy watching, knowing what moves were being done, and knowing when it was a good score.

You know what else? If I didn't already know a lot about eventing, I would have been confused at what was going on while watching the Olympic Eventing live stream. A lack of viewer needed information occurred.


Let me put this out there: most people will tune in on tv or the live stream. If they already like and know something about the sport, and can make the trip, that's when they show up in person to things like the Olympics, Pan-Am Games, Rolex, etc.


During the xc, I had a tough time knowing who I was looking at and where they were at on course as I jumped around on the live stream (my attention was split by the stream and my job functions). Maybe I'm a horrible horsey viewer because I don't recognize everyone, sorry, but that is how non-horsey people feel watching.

I know everyone has their own colors on xc, but I was miffed that there tended to be very little unity in apparel theme (for all countries) - simply a USA logo saddle pad and I think some blue shirts. I know the equipment is expensive, so how about matching helmet covers with the flag like the swimmers? Something very visible, yet doesn't infringe on rider's personal taste in safety equipment (because matching air vests are totally out, I get it). Non-horsey viewers need some kind of easily identified unifying theme, or else they don't know who they're looking at.


I tried matching pinnies to a horse/rider number sheet. Only the pinnies weren't always easy to read quickly. Every time they would cut to a different pair, I'd have to place them again, because the name/country prompt didn't always come up or stay up. Not hard if you've been watching, but definitely hard if you're just tuning in.

Think about it for a non-horsey person: if you didn't easily know who you were watching, would you keep watching? You can't assume viewers will understand horse colors either - horses to non-horsey people are brown, black, or white. Don't believe me? My husband, who is wonderful and has been showing with me for 7 years now, finally knows the very basic colors. But he's still going to tell you the bay horse is the the brown one, and he can't tell bay horses apart without riders. To non-horsey viewers, chestnuts and bays will always be the brown horses. They'll never be able to look for chrome or horse breed shapes, so it's with the riders that we need to create identifying features.


I think it would be good to always keep the rider name/horse/country up on a graphic, in addition to the penalties and time. Keeping up a 'fences completed' and 'out of' would be great too- for people just tuning in and for people who were flipping around like me. Yes, this would take some active input by people who know what they're doing in the computer side, but come on, they have to exist! If they don't, let's create them.

You know what else would be fun for viewers? To know just how fast those horses are running. Distance divided by time, yo. A quick on the fly graphic in miles per hour or kilometers per hour, not meters per minute. That's not helpful to viewers who don't understand how we dictate pace.


Dressage. Oh the fun-as-watching-paint-dry sport (not my view, I love it!). I can identify all the moves in dressage. Non-horsey viewers can't. Let's get a graphic up that also has the rider/horse name as well as the move they are doing. You want people to know what a half pass is? Or how about the basic walk, trot, canter? Label them constantly. Remember doing your times tables and timed math tests in school that taught you by repetition? That's what a non-horsey viewer needs. Constant information of what is going on. Commentators aren't enough. They talk about what's going on, yes, but they also talk about past events and things that are not immediately relevant to what the rider is doing at that exact moment. 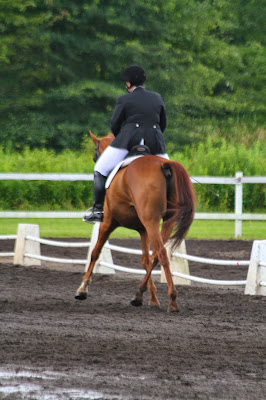 At major events, a preliminary running total percent is shown on the score board. Perhaps we could get some kind of running percent on the graphics on the live stream? Constant numerical feedback of scoring for the viewers.

For the record, I think dressage and show jumping NEED to keep their white pants and shads and coats. It's a formal occasion, let's dress like it. I'm not sure how you would show team uniformity there, aside from having everyone from each team perform one right after another.


Also, jump heights anyone? The only height I heard on the live feed was for the xc brush fences. Maybe they said it at the start of the program, but I missed that part. Show jump heights- team was one height, individual a little higher. Never was the exact height identified. So I know advanced is 3'11". Does that mean the team show jumping was under height? Or was the individual show jumping over height? Viewers tuning in in the middle won't know. Fun facts people! Repeat them!

Gymnastics competes for short time frames of a couple minutes tops. The shortest time frame of the Equestrian disciplines? The Show Jumping at 60-90 seconds. Dressage tests take 5+ min, xc takes a whopping 10+ min, though we don't see the whole thing, just the jumps. What gymnastics has is short bursts of competition, then score and what happened, all as one compete unit. I tuned in and in about 3 seconds, I knew who was competing and what was happening. It takes too long to figure that out on the Equestrian disciplines.

Something else that was missing: a running score for each team as a graphic. I wanted to see a leaderboard far more often than they were showing it. Commentators saying the score is great, however a quick visual of the top 3 teams or the top ten riders would have been nice to see more often. This is tough since there are 4 rider rotations, but I think it could be figured out. After every gymnast, they had a new team total and placing. More "who's winning" information please! 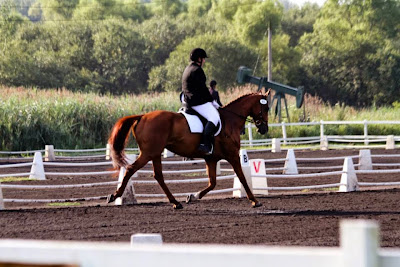 Eventing (and Dressage and Show Jumping) is not as popular as gymnastics. No amount of name changing, scoring changes, or shortening of tests is going to make a non-horsey viewer understand. I think we need to be able to quickly educate viewers or quickly describe what's happening for people just tuning in. What has to happen are easy to follow and informative graphics, even if they take up some of the screen.

It doesn't matter how pretty the dressage is, how exciting the cross country is, or how wow the show jumping is, if extremely relevant information can't be expressed to the less-than-knowledgeable viewer quickly, they'll change the live feed to something else. Commentators aren't enough.

What do you think blogland? How should the sport be changed for the sake of the audience? Or do you agree with me, that we could do a better job getting relevant information across to the viewer?
Posted by Codex Dressage at 9:30 AM