OMG guys, SO MUCH FUN.


It turns out 3 of the ladies at the barn were going to a local obstacle trail practice instead of just the one I Facebook messaged and asked to tag along with. They all compete in judged trail rides (and haul out to trail ride all over the place). So we loaded up the two trailers and off we went!


First of all, all the western riders thought Penn was adorable. And they thought my tack was so pretty, haha. Here I was worried about first impressions when I opted not to bring my "off property" helmet (aka the good one I use for lessons, clinics, shows) and the brown reins on my micklem.


I started off by leading Penn around- I figured we've only played with this type of thing once, he probably needs a refresher. I led him over the tarp (non-issue), then took him over to a shower curtain that was cut into strips and you had to walk through it. Poor creature, he just didn't understand. He wasn't afraid of it, but he didn't understand how to go through it. I ended up pulling a couple strips together to make a "door" which he promptly ran through. I walked him through it by hand a bunch of times. Each time, he kept super close to me and followed through the exact hole I created when I walked through the curtain. If I got too far ahead and the curtain closed, he'd dance and get stuck on the starting side. I got him to walk through once before I went through, so I let him walk away from it. I led him a couple times over the bridge (which was hard to do because it wasn't wide enough to stand next to him, but I had to keep moving so he didn't step on me!). I figured it was now or never and climbed on.

We went back to the tarp first (no problem), then revisited it curtain. Penn walked right up to the curtain, and was like, "I DON'T UNDERSTAND!" I ended up reaching forward and pulling the curtain a little to create an opening, which Penn promptly ran through. I patted him and brought him back around. He started to get the idea after the wind blew the curtain a little and I was ale to steer his nose into an opening. After that, he'd poke his nose out in front of him and pin his ears back and let the curtain slide over his face, all while calmly walking through.


We tried the bridge next- he was like, "OMG I have to go over it by myself!" He stretched his head and neck out and took a good look, then trotted over it. Lots of pats and I turned him around and tried again. He cantered it this time like a tiny up bank and down bank, but as a bounce, haha. More pats and "good boy"s and I brought him around again. Soon enough he was walking calmly over it. definitely still giving it the hairy eyeball, but as long as I gave him his head he was more than willing to go.

I revisited the tarp since that one is easy, and took him over to where they had a broom and 1.5' diameter green ball. I didn't see the broom at first, so I figured the horse was supposed to push the ball, even if the ball was a lot smaller than other balls I've seen for that purpose. So I marched Penn up to it, slowed him down so he wouldn't run it over, and slowly pushed him into it. Well he went, no problem, then was completely surprised when the ball rolled. Like, he dropped down, legs splayed, dodging right and left, trying to back up. So of course I ran him into it a few more times and then he was kicking it like a pro, even interested in following it around... until he stepped over it and it hit his back legs. I had him push it back to it's starting place, patted him, and let him move on.

By this point, someone had lit two flares and spaced them so you could figure 8 around them or just walk between. Off we went! Penn was a little skeptical at first, but with a little leg he VERY carefully walked between the flares, and kept on marching! I tried to get him to stop in between the flares so I could grab a pic, but he was having none of that. He'd been really good about everything- no running or spooking, but as soon as I shortened the reins and asked him to stop, he just ran through me and became very nervous. I took him back through, didn't touch the reins, and he walked calmly, yet carefully, through. Interesting. 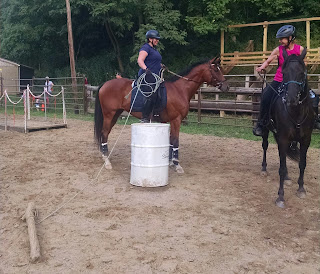 They had a big stick/small log on a long rope that we could drag around, so I decided to try that. Penn was more concerned about the rope than the thing it was attached to. It took a few minutes to get a hold of the rope, and then another few minutes to convince him that it wasn't going to hurt him. After that, he easily drug the stick/log around, and even let me shorten the rope and maneuver him around the barrel we were supposed to circle so that the stick/log wouldn't hit the barrel. I have video of it too!


Sorry it's vertical, I wasn't in control of my camera!
https://youtu.be/LMnZ2gDCWmI


We spent about an hour milling around and linking obstacles together, and watching some of our barn-mates do them properly. Penn was so good, and I was pleased that I had his complete attention the entire evening (as if he'd pay attention to anything else!), but he either stood quietly watching everyone else, or he was focused on whatever obstacle we were doing.


Overall, they had:
I had him sniff the "jumps", but had zero desire to try and jump them, or walk over them. He's also not so good at backing up (side effect of 'go forward, ALWAYS!'), and has a rearing tendency, so I opted not to try that either since it frustrates him and I wanted to keep him happy.

This was an interesting trip through Penn's psyche. He absolutely wants to be good and brave, and is so frustrated when he can't do what I want. It let me know just how well that first lesson I taught him stuck (go forward when you're scared, no matter what). I've taught him that he will be ok, as long as he keeps moving forward, and apparently I've done a good job assuring him that's the case because it's what he does when he's afraid. Examples: Diving through the shower curtain when he saw an opening. Not wanting to stop between the flares, then blowing up when I tried to force him to stop. Running over the bridge the first few times. When I'd bring him around and present the question again, he was notably calmer going through.

He did absolutely everything on a long rein. If I shortened at all, he got nervous. It was a bit eye opening really. When he gets looky and spooky in the ring, what do I do? I snatch up the reins and try to force him to bend properly and look away. I need to experiment with application here, but it seems he's found a happy place where he stretches and travels very forward when he's nervous. I need to figure out how to apply that when he's nervous or looky in the ring.

I tested the thinking on a trail ride last night- it absolutely works. If I give him a longer rein, he'll stretch and look, then keep moving. If it's really terrifying, stop, stretch, look, then he'll walk past. The stopping isn't something I want to encourage because it's not always an option, however, good experiences are good for his bravery because in reality, he's still a baby.