Lesson Tuesday night was great. Penn brought his looky to lesson, which is nice. Sometimes when I'm having a problem it doesn't surface in lesson.

Since we only had a half hour, it was a lot of work straight through (I accidentally scheduled the farrier on lesson night, which meant he was of course 40 min early and got there as I was walking out to lesson- he assured me it was fine, he had some paperwork to do). We got to lesson outside, since that's where I'm a bit nervous with his lookyness.


Trainer started by having me trot him on a circle (which was fine), then move off to doing some leg yields from the quarterline to the wall... and Penn promptly started being looky and spooky. The routine went through the following progression:


That pretty much took up a half hour, esp the part with the battling over the spooking. We were both dripping in sweat!

Overall, she got after me about keeping my hands down when he spooks, and to use it to my advantage to get more collection. When he's looking, he's not inverting and staring, he's mostly just lifting and bulging the shoulder and turning his head the wrong way. She warned me not take the bait he was offering- aka pull the inside rein to reestablish looking in the correct direction. Big half halts and a ton of seat and leg to remind him (less hand than I've been doing, oops), and use that new lift to my advantage.

She really liked his work, looking and spooking aside. She said, "When he's focused, he is such a HUGE mover." She thinks a lot of the looking came from riding him inside too much combined with him being super fit (ok so maybe I won't be adding trot sets to our routine). Mikey used to do it too if he worked all the time inside. He basically got bored going in circles and looking at the same 4 walls, so he'd come up with off task things to do. I've been riding Penn inside a ton since our meltdown at the end of June- I felt more comfortable dealing with him where I had 4 walls, and then it became blazing hot out so I just wanted to stay out of the sun. No more of that, I was told to ride outside all the time, and if it was truly a scorcher, ride 15min inside and then 15min outside. Do a ton of transitions on simple patterns to keep his focus. 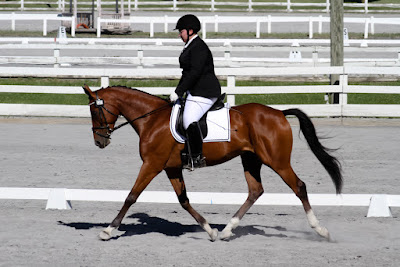 She also said that after the show season is done, give him a month off to just be a pet, not a show horse or a horse in training. I think he's earned that. I was going to give him some chill time anyway, he's been working so hard for the last year that I'm sure he could use a break.

She asked if I had pictures from when I first got him, I said yes, she said just wait til you compare now and then! I'll do something for FB of course, but I'm so excited for the one year mark on here where I can do a real compare/contrast. Penn is going back to the same show he went to last August, so I'll use those two shows to compare instead of his actual purchase date etc.

Email ThisBlogThis!Share to TwitterShare to FacebookShare to Pinterest
Labels: Lessons